Never Mind Stalin, What About Seryozha? - 60 years since Prokoviev died Sergei Sergeyevich Prokofiev ( 23 April 1891 – 5 March 1953) was a Russian composer, pianist and conductor who is probably best known, in Sunderland at least, as the composer of the ballet Romeo and Juliet – from which "Dance of the Knights" is taken ("The Apprentice" theme tune and, more importantly, the music that is played at the Stadium of Light before the start of each football match)

Prokofiev died at the age of 61 on 5 March 1953, the same day Joseph Stalin's death was announced. With the national outpouring of grief over Stalin's death, Prokoviev's death went unnoticed by the general population for a long time afterwards.  He had lived near Red Square, and for three days the throngs gathered to mourn Stalin, making it impossible to carry Prokofiev's body out for the funeral service at the headquarters of the Soviet Composer's Union. He is buried in the Novodevichy Cemetery in Moscow.  This is a picture I took of his grave in 2002.  As a Sunderland AFC fan, I felt it important to make a pilgrimage to his grave, to mark my respects to the composer of the  such atmospheric and stirring music which we have enjoyed at the Stadium of Light since 1997. 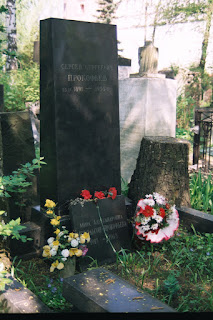 Incidentally, it's obviously 60 years since Stalin's death.  The Moscow Times has an interesting article on the continuing influence or legacy of Stalinism in Russia:

The article cites as examples: the Moscow Metro, the seven sisters skyscrapers, “It’s the architecture of a totalitarian utopia,” with monumental scale, expensive decor and elements of historical styles from classicism to Gothic, said Natalya Samover, head of Arkhnadzor, a group that promotes architectural preservation; as well as the language of politicians and bureaucrats, and also mentality and structure of the FSB - the successor to the KGB.
Posted by bouncermangel at 13:57