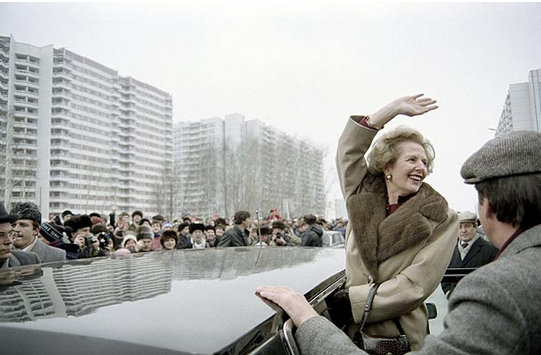 Former UK Prime Minister, Baroness Thatcher, died yesterday aged 87.  I didn't intend to mark her passing with a blog post, but I love this photo- taken during Mrs Thatcher's visit to the USSR in 1987.  She was greeted by enthusiastic crowds on her tours of eastern bloc countries (before the fall of the Berlin Wall) in the mid-eighties.

She maintained an outspoken opposition to communism that earned her the title The Iron Lady from the Soviet Union's Defense Ministry newspaper; however, much has been made in her role in ending communism in Eastern Europe.  Whilst I think her role in this has been exaggerated - these systems imploded without much intervention from the West - she was instrumental in bringing about the end the Cold War through her championing of freedom and democracy,  her belligerent stance towards the Soviet Union and forthright defence of the UK's nuclear deterrent.   Key to this, though, was recognising the reforming potential of Mikhail Gorbachev when he first rose to prominence in the Politburo in 1984.  Following her meeting with him in 1984, he famously described him as a a man with whom she can do business.  After Gorbachev became Soviet leader in 1985, she continued to develop a close relationship with him;  this helped to thaw relations between the USA and USSR, and brought the two sides together in a constructive dialogue on arms reduction.

She was loved and loathed in equal measure in the UK.   My own view?  Well, I spent much of the eighties as a left wing student despising her and campaigning against her (well for 2-3 years).  In 1984, I attended a protest march in Newcastle when she was visiting the North East.  To my shame, I took with me to the rally two eggs which I had intended to lob at her (given the opportunity).  Fortunately for her (and me) both these eggs had cracked open in my coat pocket - long before I had reached Newcastle!   Within a very short time, my political views changed considerably - especially once I had managed to get a job in a nationalised industry (after a short period of unemployment)  where I saw at first hand the profligacy and inefficient work practices she railed against which were so common in the public sector - I reassessed my views on her and became to admire what she had done for the country, to the extent that I was sad when she was forced out of office in 1990.

Her economic reforms led to the decimation of the UK's heavy industry - it may have been in parts moribund, sclerotic,  inefficient and loss making, but her policy of refusing to subsidise ailing industries hastened their terminal decline.  The North of the UK, with its predominance of heavy industry, was disproportionally affected by the rapid industrial decline;  in areas of the North-East, where I live, where there was a reliance on such industries as coal mining, ship building, steel manufacturing, some communities never recovered from the loss of jobs in these sectors.   However, a paradox of the eighties recession, long recognised by economists, was that despite high unemployment and a shrinking economy, consumer spending continued to grow.  Unemployment rates of 10-15% were a tragedy for those who were part of that statistic, but it appears that remaining 85-90% of the workforce with jobs were doing all right, thank you very much.  This probably explains her electoral popularity.  On balance, I believe that Mrs Thatcher was one of the greatest post-war leaders the UK has had.  She transformed the ailing UK economy and its political landscape in the UK, put the great back in Great Britain.