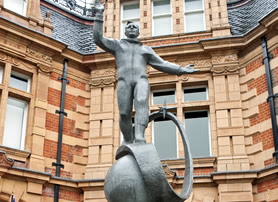 Today is the 52nd anniversary of the first manned space flight.  Russian cosmonaut Yuri Gagarin shook the world when it was announced on 12 April 1961 that he had circled the Earth in a spacecraft - Vostok 1.

After circling the planet, Gagarin became an international superstar and undertook a world tour, which included London which he visited in July 1961, three months after his legendary flight - meeting the Queen and the Prime Minister, Halrold McMillan, as well as members of the Foundry Workers Union during his visit, as he had worked as a foundryman before his career in aeronautics,.

Vostok 1 marked his only spaceflight, but he served as backup crew to the Soyuz 1 mission (which ended in a fatal crash). Gagarin died in 1968 when the MiG 15 training jet he was piloting crashed - he was 34 years old.

The statue of him, pictured here, has recently been moved from Admiralty Arch to a permanent home at the Royal Greenwich Observatory in London.  On 7 March 2013, there was a ceremony held there to celebrate its new home.


In 2011, for the 50th Anniversary of his flight, a statue of Yuri Gagarin was unveiled in London just off The Mall, next to Admiralty Arch, and features the cosmonaut in his flight suit and standing on a globe. A host of dignitaries were present for the unveiling, including the cosmonaut's daughter, Elena Gagarina.

"The 12th of April 1961 was one of the most remarkable days in history, uniting all people in all countries on all continents," said Gagarina, who is the current director of the Kremlin Museums.

Yelena Gagarina was also present at the unveiling of the statue at its new Greenwich home in March and said “I would like to thank all people living in London for the support of the idea to place the statue in Greenwich park. I hope my father's statue will be evoking only smiles, and I feel very happy today for Yury Gagarin, cosmonaut and man, who was dreaming of the sky, and at the same time always dreaming of home. And finally he found this beautiful home in Greenwich”.

The figure is a copy of one sited in the town of Lubertsy, just outside Moscow, where Yuri Gagarin trained as a foundry worker in his mid-teens.  The original was made in 1984 to celebrate what would have been the cosmonaut's 50th birthday.