Yanukovich in Rostov - not the Hotel Ukraine Moscow

Ousted president of Ukraine, the corrupt, murderous thug Yanokovich has turned up in Rostov-on-Don in Russia.

Rumours had been circulating that he was holed up in the Ukraine Hotel in Moscow.

Posted by bouncermangel at 16:08 No comments:

Now on sale at Lidl.  For procrastinators everywhere... 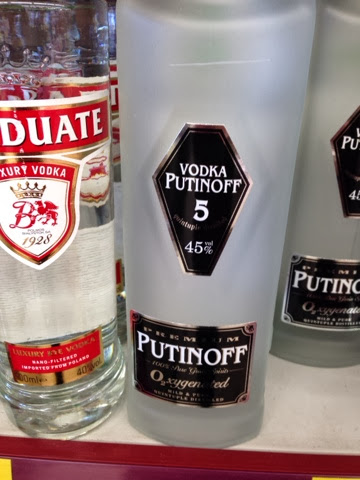 Posted by bouncermangel at 16:10 No comments:

As I reported back in October, the statue of Felix Dzerzhinsky is not to be restored to its location on Lubyanka Square: http://blog.therussiahouse.net/2013/10/iron-felix-to-stay-put-again.html.

As reported in the Moscow Times this week, the Duma has confirmed this the case.

Moscow Duma Says Dzerzhinsky Will Not Return to Lubyanka | Arts & Ideas | The Moscow Times
Posted by bouncermangel at 14:10 No comments:

Another negative Russia documentary of questionable timing. Channel 4 documentary last week called Hunted which documented homophobia in Russia was intended to coincide with the start of the Winter Olympics in Sochi - obviously capitalising on the international criticism of Russia on its gay rights and the new law prohibiting gay propaganda.  Setting that aside, it was an interesting programme but I found it thoroughly depressing.

It followed the groups of vigilantes, in Moscow and St Petersburg, hunting down, beating up and humiliating gay people. My overall impression was why do these people do it? Why go to such lengths - does other people's sexual identity upset them so much?  Or do they get their kicks out of it?  The documentary showed scenes of bullying, violence and humiliation - the perpetrators were obviously getting some kind of thrill out of it - enjoying the power, sexual thrill of talking about homosexual acts with their victims, sadistic pleasure in exacting humiliating punishments. It seemed obvious to me that they were in troubled by their own sexual identity, but hey, who am I to comment.


There was one man in particular, a married family man with a young child, who drove round engaging in harassment of gay people - but he was a jewellery designer! I thought, oh oh, hello - here is someone in denial.

I don 't want to get all moral relativist here, but it does seem to me, coming from a culture in the UK of widespread tolerance, acceptance of LGBT lifestyles, and indeed the recognition in law of gay marriages, that such developments are positive and not indicators of our moral decay. This has to be the right way.  The views of some of the Russian Orthodox priests and others in the documentary are morally repugnant, simplistic and backward.

One hopes that they are not representative of the country at large - I'm sure they are not.

Posted by bouncermangel at 14:55 No comments:

Back in the bad old days of the Soviet Union, when Western influences were frowned upon and aspects of western culture banned from the TV screens (What? the Russians had TVs back then?) western pop music could only be seen on the TV if it was accompanied by a political commentary criticising the decadent music - often drowning out the music itself.  But it seems this nanny state approach continues to this day in state owned socialist broadcasters.  BBC - I'm talking about YOU!

We couldn't just sit back and watch the spectacle of teh Winter Olympics opening ceremony, with the usual the dumb-ass commentary from sports commentators, we had to have a political commentary from the BBC's Moscow correspondent Daniel Sandford - a decent enough and objective reporter - but here talking about the Olympics being propaganda for Putin, being overshadowed by security fears, allegations of corruption, complaints from unpaid construction workers and concern about the rights of sexual minorities in Russia.  I don't think that an explanation of the political context was appropriate at this point in the proceedings.

What took the biscuit though was Hazel Irvine's comments during the section depicting the post war period in the USSR - scenes of reconstruction, space achievements, as well as many popular cultural references from the  50s 60s 70s Soviet Union. The commentator remarked that the audience in the stadium were really loving this section and she was puzzled that this was the case. How come this was a happy period for them! For gods sake - the post-war USSR was never a North Korean style closed society or dictatorship.

I remember a radio interview with Rodric Braithwaite, former British Ambassador to Russia, who was discussing his book  "Moscow 1941" -  about the first year of Russia's involvement in the World War II; he described his interviewees recalling that terrible period in their lives with some fondness - despite the horrors of the battles, the hardship and the repression of the Stalin period, this was a time in their lives when they were young, made friends, had adventures, fell in love - the war was merely the backdrop.

Whatever the reality - nostalgia is nostalgia - it can be pleasurable making a trip down memory lane (although I think derives from the ancient Greek for our pain).  So it is hardly surprising that the Russian people of that generation thoroughly enjoyed the spectacle.

I was so incensed, I neglected to count the number of times "iconic" was mentioned.  This over-used the point of meaningless word is so ubiquitous in BBC broadcasts nowadays - such is the fall in journalistic standards in that institution.
Posted by bouncermangel at 15:52 No comments:

Today, an American snowboarder pulls out of the Winter Olympics at Sochi, over safety concerns - and it's headline news; we have constant flow of negative reports filling our airwaves and newspapers: reports of unfinished venues, lack of accommodation for journalists, mild weather / potential lack of snow, terrorist attacks, environmental concerns, bribery and corruption, anti-gay legislation; huge costs and budget overruns. I can't help thinking that the western media is rubbing its hands with glee over any scandal or problem affecting the forthcoming Winter Olympics - they want it to fail.

Even the supposed fact of a journalist bitten by the tiger that Putin was photographed with is seen as newsworthy (the tiger in question is just a cub, and there is some doubt over whether the incident happened.

Sure, this is a massive propaganda exercise for President Putin, which may or may not be successful in masking or fixing any of Russia's many problems, but it is seen on the international stage as an opportunity for political point scoring.

One notable exception to this negativity was a recent 2-part BBC program: Russia on 4-wheels - a whistle stop tour of the "new" and "old" Russias. Two presenters set off from Sochi in different directions: one in a modern armour plated people carrier (more like a tank) favoured by oligarchs, heading northwards to Moscow, St Petersburg and Murmansk; the other in a 40 year old UAZ headed off eastwards to the Urals via Togliatti, Volgograd, Perm and Nizhny Novgorod. I enjoyed the program and I felt it gave a fairly even handed coverage of Russia in general and the Sochi Olympic preparations in particular - it was a fairly short series - two hour-long episodes to cover a lot of material.

Their report on Sochi visited the impressive facilities, the huge infrastructure projects - the presenters seemed genuinely impressed and were positive about the faciltiers.  But they didn't gloss over some of the negatives: the alleged corruption and the adverse environmental impact on Sochi and it's residents.

Much has been made of the huge cost of hosting the Olympics - as if this alone was evidence of corruption. The scale of spending is huge. The most expensive Olympics to date was Beijing which came in at $43 billion - the London games were a modest $10.4 billion. Sochi 2014 is estimated to be $50 billion. This seems at first glance to be profligate to the extreme, with the cost of hosting the games generally in the region of $3 billion.  But much of the costs incurred in Sochi relate to the infrastructure and civic development rather than on Olympic facilities alone - and this has been a mammoth undertaking.

There are seven new venues built in two locations: an Olympic Park was constructed in Sochi's Imeretinsky Valley on the coast of the Black Sea, with Fisht Olympic Stadium and the Games' indoor venues located within walking distance, and snow events will be held in the nearby mountains at Krasnaya Polyana - at a new, world-class ski resort which has been built.

But this represents a very small part of the overall project -  in addition, preparation for the games has included modernizing the telecommunications, electric power, and transportation infrastructures of the region. This has involved building new and improving many roads, tunnels, bridges, interchanges, railroads and stations in and around Sochi. There are new road and rail links (a four-lane highway up the mountains, and a high speed train link: Moscow to Adler, near Sochi), and extensive tunneling through the mountains.
This has generally been overlooked by western media.

Legacy is an important consideration in Olympic developments, this one will be huge for the region.  With improved links to Moscow and regional connections, it may help to establish Sochi as a year round international tourist destination.

I think it's time to stop the sniping, the criticisms, and negativity and lets just enjoy the games.

Posted by bouncermangel at 10:42 No comments: