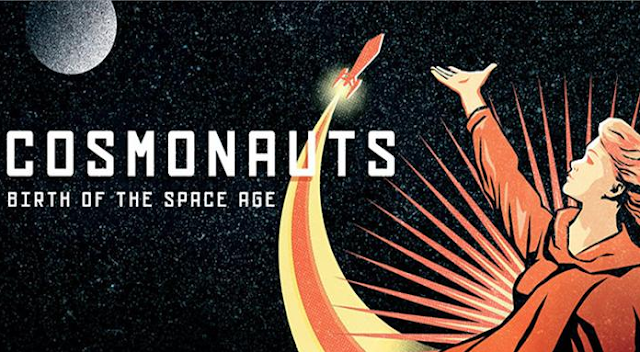 Alexei Leonov, is in London Today at the Science Museum.  The 80 year old retired Cosmonaut, most famous for being the first man to walk in space, was at the museum's announcement of a forthcoming exhibition on Soviet / Russian space travel "Cosmonauts".  This year marked the 50th anniversary of his pioneering space walk: http://blog.therussiahouse.net/2015/03/1st-space-walk-50-years-ago.html
Leonov also took part in another famous space expedition - 1975 Apollo-Soyuz mission – Soyuz 19 – the first joint space mission between the Soviet Union and the United States.
The Science Museum's exhibition "Cosmonauts" opens in London on 18th September 2015.  This is the blurb from their website:
In 1957 Russia launched the world's first artificial satellite, Sputnik, into space and just four years later sent the first ever human – Yuri Gagarin. Discover the dramatic story of how Russia turned the dream of space travel into a reality and became the first nation to explore space in this once-in-a-lifetime exhibition.
Cosmonauts will reveal the most significant collection of Russian spacecraft and artefacts ever to be shown in the UK. Come face-to-face with Vostok-6, the capsule flown by Valentina Tereshkova, the first ever woman in space, and examine the fascinating gadgets cosmonauts need to live in space, including a shower, toilet, medical instruments and survival kits for crash landings.
Explore the historical, cultural and spiritual context of Russian space travel, shaped especially by the turbulent early decades of the twentieth century. See poignant testimonies and memorabilia belonging to some of the biggest names in spaceflight and discover the deeply personal stories of the pioneers who kick-started the space age.
Opens 18 September 2015
Exhibition will be open until 22.00 every Friday
Posted by bouncermangel at 14:38